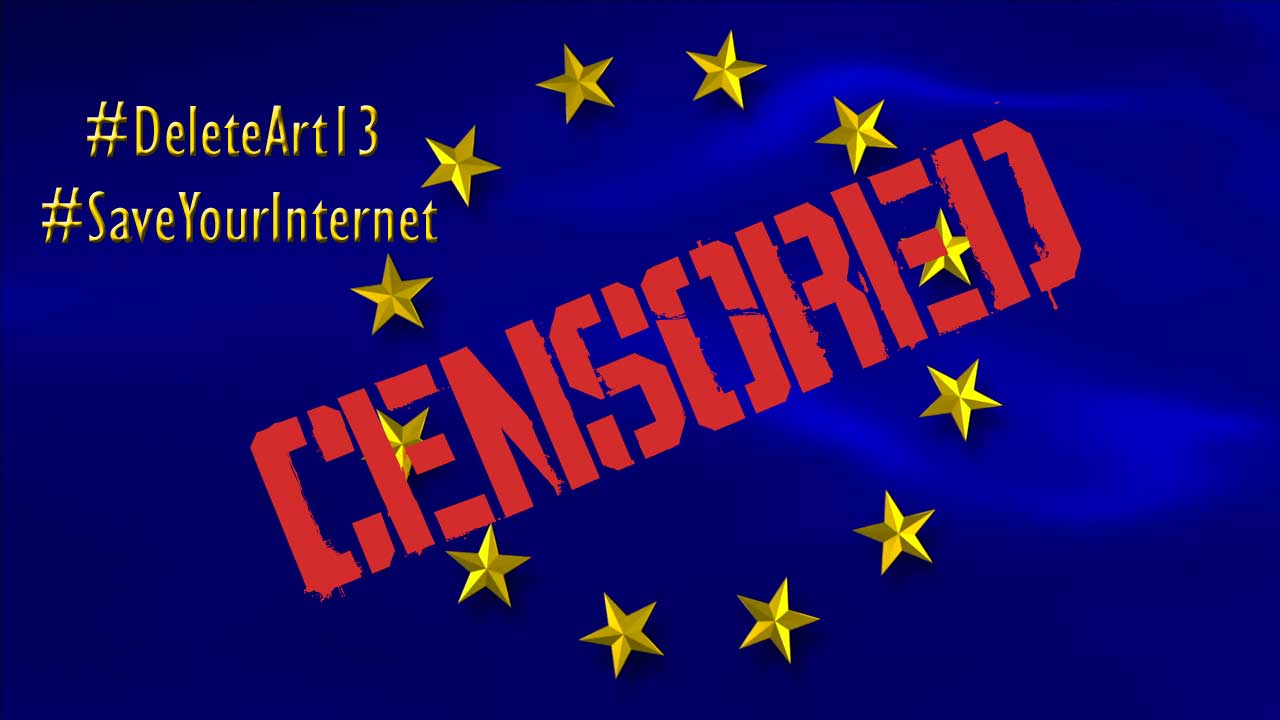 The Brexit debate was fought and won on the grounds of xenophobia and twisted imperialist entitlement, but today’s vote by the European Parliament to approve Article 11 and Article 13—the EU Copyright Directives —has made a Brexit appealing. In an internet sense at least.

This is a black day for the internet, freedom of speech and freedom of information. The supporters of the German #SaveYourInternet supports will be the most galled since the vote came hot on the heels of an exclusive report that German votes on the issue were traded for French concessions on Russian gas.

The European Parliament voted by 438 to 226 to pass the law, which aims to compensate artists and creators. Sounds lovely and fair, but it will it has the implication to turn the internet into one big dreary policed TV show with constant ad breaks, and stop it being the most powerful tool for freedom of speech and mobilizing people. It will stifle the speed of which content can be shared and if you were a paranoid conspiracy theorist you’d say the corporate elite are trying to halt the spread of information for fear of a revolution (I’d never say that of course. The CIA might be reading).

Article 11 means internet firms have to pay news outlets for reusing their content. Again, seems awesome. Nothing pisses me off more than to see journalism struggling as it provides all the content while creepy data harvesters store every click and share and mop up all the ad dollars. But it could have a horrible effect on the spread of important news which could be slowed down to a stop. Smaller vendors will not get the exposure they need. I also think there has to be a better way to get honest journalism the money and the exposure it needs.

Article 13 means web giants have to filter copyrighted material like songs and videos and what have you, unless they have been specifically licensed for reuse. This is the more ridiculous of the two articles. There are endless reasons to upload copyrighted works. You might upload a clip from a concert as your favorite song plays. You might be wearing your favorite movie T-shirt in a selfie you want to upload. You might upload the cover of an album you want to sell online, or you might want to post pictures of a house party, including the books on shelves and posters on walls.

In a piece about the legistation, Cory Doctorow for The Electronic Frontier Foundation explained perfectly whey Article 13 is just so ridiculous.

“Article 13 punishes any site that fails to block copyright infringement, but it won’t punish people who abuse the system. There are no penalties for falsely claiming copyright over someone else's work, which means that someone could upload all of Wikipedia to a filter system (for instance, one of the many sites that incorporate Wikpedia's content into their own databases) and then claim ownership over it on Twitter, Facebook and Wordpress, and everyone else would be prevented from quoting Wikipedia on any of those services until they sorted out the false claims. It will be a lot easier to make these false claims that it will be to figure out which of the hundreds of millions of copyrighted claims are real and which ones are pranks or hoaxes or censorship attempts.”

Let’s be clear. We are not against copyright, but these directives are ill-thought out and will be policed in an absurd way. Yet again, we are trusted too much to AI. An upload filter is the only solution to cross check so much content and those things do a terrible job at the best of times. The ins and outs of copyright law is too complicated for AI to judge.
This legislation will lead to a stifled internet where smaller companies will be penalized and savvy criminals can make money from other people’s work. The tech giants will become even stronger gatekeepers of the web as only the biggest and wealthiest can afford to comply with it.

Thanks EU. Thanks for giving those Brexit xenophobes the best reason yet to leave.